I'm not sure if you can be a resident of mid Florida and not visit Wal Disney World. Granted we are not annual pass holders (well, it seems no one will be with the "new normal") and we do not run off to WDW on a regular basis, but this year was special.

Beth's son lives in Michigan with his girlfriend and their daughters (11 and 14). We had originally thought of taking everyone on a cruise again (we had a great sailing right before the supposed pandemic shut it all down). Once we looked at alternatives and some research I realized we could do 3 park Disney passes for all and lodging them in a cabin at a campground. Of course I got the park passes and made our reservations to make sure we could visit the parks. 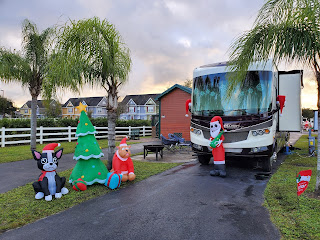 As a note reservations for this trip were made in June, 2020. For us, we got a nice pull through site next to the cabin we reserved for the family. They were in the Goofy cabin that had a loft with two beds for the girls and a separate queen bedroom along with a small living area, kitchen and bathroom. The cabin was clean and ready.

Since we pulled the RV in the day prior to their arrival, after I checked in to the cabin Beth promptly went in and did some Christmas decorating for them. I of course got all our inflatables up and running.

We have stayed at this KOA before and enjoy it. It is very clean and kept up. The staff and workampers are all friendly and helpful. Its location is great to get to all the parks - Disney, Universal and the rest. We have enjoyed Disney Fort Wilderness but to be fully honest their prices, especially during holidays is ridiculous.

Our first park to visit this week was Animal Kingdom. The temperature was a bit chilly, but the sun was shining and that made a big difference. The Disney parks were operating at about 35% capacity and many usual events and attractions were not operating. Shows and character encounters were all non-existent. Entering the park was organized and there was several cast members and police observing. Everyone had to have a face mask (or face diaper depending on your preferred terminology 😄). They took your temp and had "Cool down" tents you could use if you had a fever. Within the park they had areas deemed rest areas that you could sit and remove your facemask. Facemask were not required while eating or drinking, but one had to be stationary. 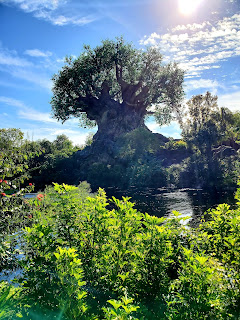 We enjoyed the safari and several other rides. Avatar Flights of Passage is a simulator-type ride but the experience is excellent as you ride individually. Expedition Everest roller coaster was very popular with the girls - they rode it about 4 times in a row. The walking exhibits in each of the areas was very well laid out and had excellent habitat displays. Although they did not have character encounters they had recurring boats in the water ways with different characters waving.

After having some good experiences we had reservations at the Rainforest Cafe for lunch. The food and service was excellent and highly recommend. It's a bit pricey but we believe you get a good value for the meal. Beth and I were done with the park and had to get back to RV for the dogs, so we hailed an Uber and headed back. The rest of them stayed until almost closing time, enjoying the Tree of Life at night.

After a great day at Animal Kingdom we got some sleep and arose to great sunny weather and ventured to our next park - Disney Hollywood Studios. We had attempted to get into the virtual queue for the Star War's Galaxy Edge attraction - as soon as the opening time hit I made and attempt and was put in a stand by group - well away from a possibility of getting into the attraction. I'm not sure how they manage the virtual queues but it seems impossible that we ended up that far down when we tried to get on line immediately. I feel they have some type of shenanigans going on that allows certain people in line and other are at the mercy of standby.

Even with that disappointment we started our great day. As with Animal Kingdom, masks were required and temperatures were checked prior to entering. Shows were not running and character visits not allowed. The one thing I really missed were the boulevard characters they used to have on the entrance street. They did have an occasional very small "parade" of characters through the street on a recurring basis.

I, personally, had been very excited to get back to this park for one simple attraction - Twilight Zone's Tower of Terror. It was great to ride this again and take the girls. The eldest almost backed out after we got seated but she was a trooper and made it - and in fact wanted to do it again after it was over. The Aerosmith Rockin' Roller Coaster was nearby and was worth the small wait. The Star War's area is very well done and quite the experience. The Smuggler's Run simulator was enjoyable and requires some interaction with the ride to enjoy it at its fullest.

Dining was a bit more difficult here than in Animal Kingdom. All the places were booked solid and had been for a couple months prior to our visit. I had hoped to get into the Prime Time Cafe but it was simply not to be. We ended up going to PizzaRizzo and had a very tasty personal pizza and Caesar salad. The "new normal" did not allow counter service as once was - we had to make an order on our phone, pay fr it via phone and we got notified when the order was ready and what counter lane. We then were able to enter and go the counter and pick up the order and proceeded outside to a table.

As with the earlier day Beth and I chose to head on back to the RV by hailing an Uber. All the parks have a ride share area right outside the main gates.

The next two days were Christmas Eve and Christmas Day. For Christmas Eve we ventured to Gaylord Palms to see their Christmas displays and eat dinner at their Villa de Flora buffet. Te resort is always a great visit with their different areas (St Augustine, Key West, Everglades). The Villa de Flora had just re-opened with their new décor and the food was fantastic, as always - except they no longer had their wonderful bread pudding for dessert.
Christmas day was spent at the RV where I prepared a turkey in our oil-less turkey fryer and a ham in the convection oven. The instant  pot got its workout as I also made loads of mash potatoes. We all caught our breadth these two days to prepare for the next park.

The day after Christmas was met with a 36 degree morning - but we had our park reservation so off we went. Parking and entering was the same as the other parks, no real issues. We went up the ramp to take the monorail to the Magic Kingdom. No way were standing on the ferry in this cold.
Again, as with the other parks, masks and temperatures were checked prior to entering. Also, shows were all cancelled as were character encounters. After walking onto main street there was a group of characters on the train balcony waving and welcoming everyone (the train was out of commission in order for construction of a new attraction could occur).
The Magic Kingdom has some great attractions and it was always fun to watch the girls, especially the eldest as she had never been there. We made the rounds of all our favorites - Enchanted Tiki, Country Bear Jamboree, Haunted Mansion, Pirates of the Caribbean. The riverboat was not in the basin and the water had been drained for maintenance. It was kind of odd not seeing or hearing the riverboat make her journey.
After experiencing some attractions it was time for lunch and I had gotten us reservations at the Crystal Palace - it had just re-opened the week prior. Food was good - not exceptional considering the price.
After some more attractions and walking the stores on Main Street, Beth and I head off to Uber back to the RV and left the rest to enjoy the park more - they went back on Space Mountain about 4 times and revisited a lot of others.

Our last full day in the area was spent at Disney Springs. This is a great shopping and dining area with a lot of things to see. There was quite the line to get into the Disney Store (which is huge) but the line moved rather quickly. All stores were limited the number of guests inside but as got there as they opened we did not have to wait. Later in the day when we went back to some stores there was a small line that had to be used.
For our lunch, we all agreed that we had the best meal of the week at House of Blues. The restaurant is at the far end of the complex and offers indoor or out door seating. We all had different things and we all agreed it was the best meal of all the parks. Service was fantastic and we will definitely be back.
at December 28, 2020 No comments: